NEW YORK, NY (August 16, 2021)—Columbia will award the 2021 Louisa Gross Horwitz Prize to Katalin Karikó, PhD, and Drew Weissman, MD, PhD, for trailblazing work on messenger RNA (mRNA) vaccines for COVID-19. The prize will be presented at a ceremony on January 5, 2022. 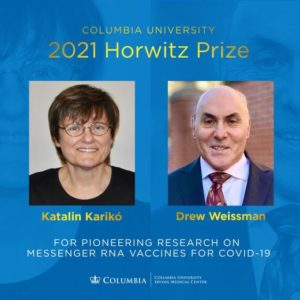 COVID-19 is a contagious disease caused by severe acute respiratory syndrome coronavirus 2 (SARS-CoV-2). First identified in late 2019, the spread of SARS-CoV-2 worldwide sparked one of the deadliest pandemics in the past century.

Decades of research on messenger RNA by Karikó and Weissman laid the foundation for the creation of incredibly effective COVID-19 vaccines that are helping to turn the tide of the pandemic.

Despite the elegant concept, Karikó and Weissman had to overcome several obstacles on their way to making mRNA vaccines a success.

Early in their research, the two discovered that mRNA molecules could not instruct cells to make enough viral protein to trigger an immune response and were highly inflammatory. The mRNA molecules were also destroyed quickly after they were injected into the body.

Years of innovative experiments and clever adjustments led Karikó and Weissman to create a modified version of mRNA. In this alternative form, a key component of mRNA called uridine was substituted with an analog—a molecule that looks and works the same but does not provoke inflammation. This key insight finally transformed mRNA into a viable and highly effective vaccine platform.

Karikó and Weissman’s work represents a historic landmark in vaccine development: The COVID-19 vaccines are the first approved (for emergency use) that use mRNA. Developed just 11 months after scientists in China originally identified and sequenced the virus, these vaccines demonstrate one of the main advantages of the mRNA platform: They are much quicker to produce than traditional vaccines. Previously, no new vaccine had been developed and approved in under four years.

Traditional vaccine platforms require more time to purify proteins in vast quantities or to safely inactivate live viruses; mRNA vaccines, by design, bypass these steps. The swiftness of the platform could be essential for countering other diseases and future outbreaks.

Numerous studies show that the mRNA COVID-19 vaccines are extremely safe and highly effective. Thanks to the pioneering efforts of Karikó and Weissman, almost 1 billion doses of mRNA COVID-19 vaccines have been administered so far, greatly protecting people around the world from severe illness and death caused by SARS-CoV-2 infection.

Karikó and Weissman are the 107th and 108th winners of the Horwitz Prize, which is awarded annually by Columbia University for groundbreaking work in medical science. Of the 106 previous Horwitz Prize winners, 51 have gone on to receive Nobel Prizes. The award ceremony and honorary lectures will take place on January 5, 2022. 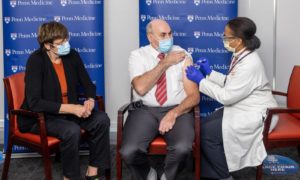 Katalin Karikó and Drew Weissman receiving a dose of the COVID-19 vaccine they helped to create. (Credit: Penn Medicine)

Katalin Karikó, PhD, is the senior vice president of biotech company BioNTech, which is based in Germany. She also is an adjunct professor at the Perelman School of Medicine, University of Pennsylvania. Karikó earned an undergraduate degree in biology and a PhD in biochemistry from the University of Szeged in Hungary.

Karikó and Weissman discovered that modifying the nucleosides of RNA prevents the molecules from being destroyed prematurely, increasing their protein-producing capacity and ability to appropriately activate the immune system. Their joint patent was used by BioNTech/Pfizer and Moderna/NIH to create COVID-19 mRNA vaccines.

How did you first meet and start working together?

Drew Weissman (DW): Younger researchers don’t realize this because they don’t know what a photocopier is. But back then, the only way you could read a journal was to photocopy it. So it was a friendly fight (between Kati and I). Whoever got there first got to use it first, then the other had to wait. But we started talking, and we were looking for ways of making new vaccines. RNA hadn’t been tried before, and Kati had the RNA, so we tried it, and we started working together.

What was your reaction when you first saw the amazing vaccine efficacy numbers?

Katalin Karikó (KK): You know, maybe I was naive, but I kind of expected that, because we had already seen before in 2017, that every viral target, when used in different animal models, including monkeys, was always very protective. And of course, in the phase one and two trials, we could see the high level of the antibodies, we could see the cellular immune response. So, it was kind of obvious.

I celebrated by eating a whole box of goobers chocolate, which was (first) made 100 years ago in Philadelphia. Usually I don’t need the whole box! And of course, I’m not really celebrating until everybody is safe, and the pandemic will end.

How did it feel to get vaccinated with something that you worked years to help create?

DW: Kati and I got immunized together. It was exciting because we spent 23 years working on RNA, and the hope is always that someday something you work on will go into people. And now it was going into us. So that was a great feeling.

How do we address the challenge of variants?

DW: The fear is that someday variants are going to start appearing that the vaccines don’t work against. Because of the speed of mRNA vaccines, we can make a new one, We can make a booster very quickly. But I really hate having to chase after this virus for the next five years, to keep making new variant vaccines. So the most important thing is to vaccinate the world.

The other thing is that since last spring, we’ve been working on a pan-coronavirus vaccine. There have been three coronavirus epidemics in the past 20 years, you have to assume there’s going to be more. So we can do what we did this time, and that’s work quickly and make a vaccine, but that still shuts the world down for a year and a half. So we’ve started making a vaccine that would work against any coronavirus that, that crosses over from bats, or pangolins, or civets, or any other animal, so that the vaccine is ready to go, or even better is given to people now, so it will prevent the next COVID-19, or COVID-22 or -25, or whenever it appears, before it happens.

What inspired you to become a scientist, and when you started, could you ever imagine working on such a historic problem?

DW: I got interested in basic science when I was in college, and I actually did a master’s degree too. After that I did an MD-PhD because I knew I was interested in research. When I did my fellowship, I went to Tony Fauci’s lab, back when HIV was just being discovered.

Many of the previous prize winners are immigrants. Why do you think immigrants and a diversity of ideas are so important for good science?

KK: In 1985, when I flew with my two and a half-year-old daughter and husband to the US, we had no cell phone, there were no credit cards, and there was no nobody to ask for help because we didn’t know anybody in the United States.

And also, you are always coming up with solutions. I was so used to, in Hungary, that if we don’t have something, that we don’t have chemicals, I can make it. Look up how to make it, always solving a situation instantly, and not like, oh, (it’s) back ordered, it will come later. No, we can do it and always, you have to adapt to the changing situation.

KK: I think that a scientist is similar to a rock musician, you know, they are always playing, and there is always somebody listening until they drop dead on the stage. You don’t see a rock musician go into retirement, because they enjoy making music. I enjoy making science.

The Louisa Gross Horwitz Prize was established in 1967 by the late S. Gross Horwitz. It is named in honor of her mother, Louisa Gross Horwitz, who was the daughter of Dr. Samuel David Gross (1805-89), a prominent Philadelphia surgeon who served as president of the American Medical Association and wrote “Systems of Surgery.” Of the 106 Horwitz Prize winners to date, 51 have gone on to receive Nobel Prizes. Most recently, 2014 Horwitz Prize winner James P. Allison, PhD, of the University of Texas MD Anderson Cancer Center shared the 2018 Nobel Prize in Physiology or Medicine with Tasuku Honjo, MD, PhD, of Kyoto University.

Columbia University Irving Medical Center provides international leadership in basic, preclinical, and clinical research; medical and health sciences education; and patient care. The medical center trains future leaders and includes the dedicated work of many physicians, scientists, public health professionals, dentists, and nurses at the Vagelos College of Physicians and Surgeons, the Mailman School of Public Health, the College of Dental Medicine, the School of Nursing, the biomedical departments of the Graduate School of Arts and Sciences, and allied research centers and institutions. Columbia University Irving Medical Center is home to the largest medical research enterprise in New York City and State and one of the largest faculty medical practices in the Northeast. Columbia University Irving Medical Center shares a campus with its hospital partner, New York-Presbyterian. For more information, visit cuimc.columbia.edu.

Story Source: Materials provided by Columbia University. Note: Content may be edited for style and length.