Restrictions from Melbourne’s lockdown is set to ease on Friday with the government imposing a 25-kilometre travel bubble for Melburnian’s.

According to Victorian health authorities, this new case is linked to the current outbreak but has been in quarantine during their infectious period.

If there are no more new cases reported, students are more likely be back in classrooms and metropolitan Melbourne will move to a similar lockdown restriction to that currently in place in Victoria which also includes a ban on home visitors.

Restrictions are expected to ease in regional Victoria as well. 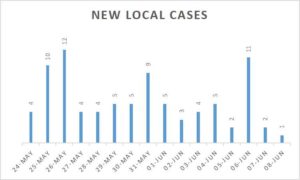 Acting Premier James Merlino assured Melburnian’s last Tuesday that an extension to the lockdown is “highly unlikely” given the low number of “mystery” cases currently being recorded in the communities.

The snap or “circuit-breaker” lockdown was initially slated for only 7 days. Authorities added another week as cases linked to the outbreak continued to be found within the community.

Epidemiologist, Hassan Valley, from La Trobe University said that if no new cases are reported then easing the lockdown restrictions was the right thing to do. He also said that health authorities should feel “very” confident about this decision.

However, Chief Executive of the Tourism Industry Council, Felicia Mariani ha said that the 25-kilometere bubble will be ablow to businesses situated in regional Victoria. She told ABC radio that 80 per cent of tourists in regional areas actually come from the Greater Melbourne area.

Further decisions will be announced after senior members of the health ministers meet this morning.

Tags::
Previous Article
A breakthrough in understanding the physics of blood clots
Next Article
What works in family planning and reproductive health programmes?

What makes us sneeze? understanding sneezing to treat future outbreaks