Abuse doesn’t discriminate. People of all ages, ethnicity, environment, and gender may be vulnerable or at risk. The purpose of World Elder Abuse Awareness Day is to raise awareness, support  and prevention of elder abuse, neglect, and exploitation

There are some characteristics or factors that older people who experience abuse are likely to share. These factors can be grouped into three categories: Environmental, Personal, and Perpetrator. Although these are not the cause of abuse, they should be considered as risk factors and can be helpful in understanding who is at greater risk of abuse. 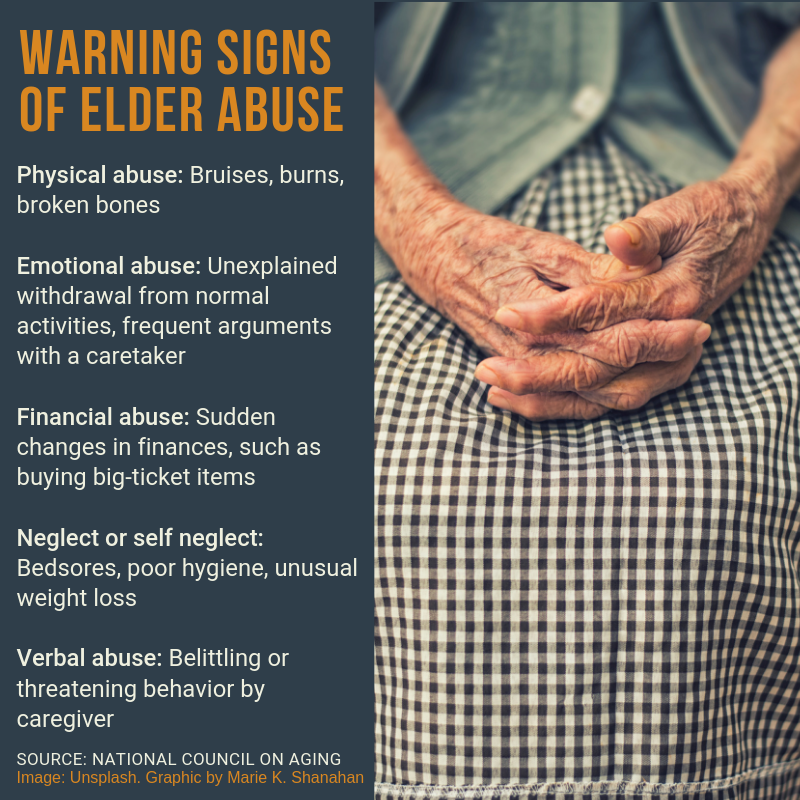 While one sign does not necessarily indicate abuse, some tell-tale signs that indicate
abuse are:

Elder abuse is a lack of respect and violates an older person’s
basic right to feel safe.

…….. up to 14 per cent of older people may experience it in the form of physical, emotional, financial, social or sexual abuse.

Seniors Rights Victoria has issued an alert highlighting the potential increase of elder abuse in the community as a hidden impact of the COVID-19 emergency.

Research suggests that up to 14 percent of older people may experience it in the form of physical, emotional, financial, social or sexual abuse.

Elder abuse can cause stress, anxiety, and depression and lead to increased risk of ill health, hospitalisation and early death.

Seniors Rights Victoria Manager, Jenny Blakey said the major stress being caused by the unprecedented and drastic changes to the social fabric of Australia could cause an increase in elder abuse.

“Elder abuse is any mistreatment of an older person by another person with whom they have a relationship of trust. Often that person is a family member or carer, but it could be a friend or neighbour on whom they depend.”

Ms Blakey said in the current economic climate with large numbers of job losses and people being unable to pay their rent or home loans, the trend to move and live with older parents or other relatives will be driven by financial necessity.

“Depending on family relationships and arrangements this may work out, however, at Seniors Rights Victoria we deal with cases that have resulted in elder abuse.”

On many occasions, the problem of elder abuse is raised with Seniors Rights Victoria by a family member or a friend who has concerns for a person’s welfare.

The different forms of elder abuse are ways for another person to take over or control the life or property of an older person, Ms. Blakey said.

Some forms of elder abuse are criminal acts, for example acts involving theft or fraud. Elder abuse is a lack of respect and violates an older person’s basic right to feel safe.

One of the most critical demographic changes is that more Victorians are growing older than ever before. As of 30 June 2019, 30.6% of Victorians enrolled to vote were aged 60 and over – that is in excess of 1.2 million voters.

Overall, more than 20% of the Victorian population is aged over 60 and that number is increasing rapidly.

By 2031, Victorians aged over 60 living in Greater Melbourne will comprise 22% of the population, and almost a third (31%) of Victorians living in rural and regional areas will be aged over 60.

Tags::
Previous Article
Aged Care Services List: What services are available through My Aged Care?
Next Article
ER Doctor Shares What It’s Like to Be a Breastfeeding Mom Fighting the Pandemic

Dementia in seniors in Australia report as of September 2021
Nina Alvarez Sep 21, 2021

Dementia in seniors in Australia report as of September 2021

ER Doctor Shares What It’s Like to Be a Breastfeeding Mom Fighting the Pandemic
Healthcare Channel Jun 16, 2020