Last November 20, Aboriginal and Torres Strait Islander Social Justice Commissioner June Oscar gave a powerful speech on health inequality. She called for government at all levels in Australia to “flip the system from crisis to prevention investment”.

In her speech, delivered at the AbSec Biennial Conference, invites attention to the direct and cyclical link. From the high rates of removal of Indigenous children into out-of-home care and poor outcomes for Indigenous communities across Australia.

“While most Australian children live in safe, healthy environments and do well, there are some groups whose rights are not well protected, which impacts negatively on their well-being and ability to thrive. This includes Aboriginal and Torres Strait Islander children, children with disability, children in care, children in rural and remote locations, those from culturally and linguistically diverse backgrounds, and LGBTI children,” said Commissioner Mitchell.

Mental health outcomes for Australian children are concerning, with suicide the leading cause of death for children aged 5–17 in 2017 and 35,997 hospitalisations for intentional self- harm in the ten years to 2017.

“There is a national shortage of mental health services and more needs to be done to care for the mental health and emotional wellbeing of young people and much earlier in their lives,” Commissioner Mitchell said. 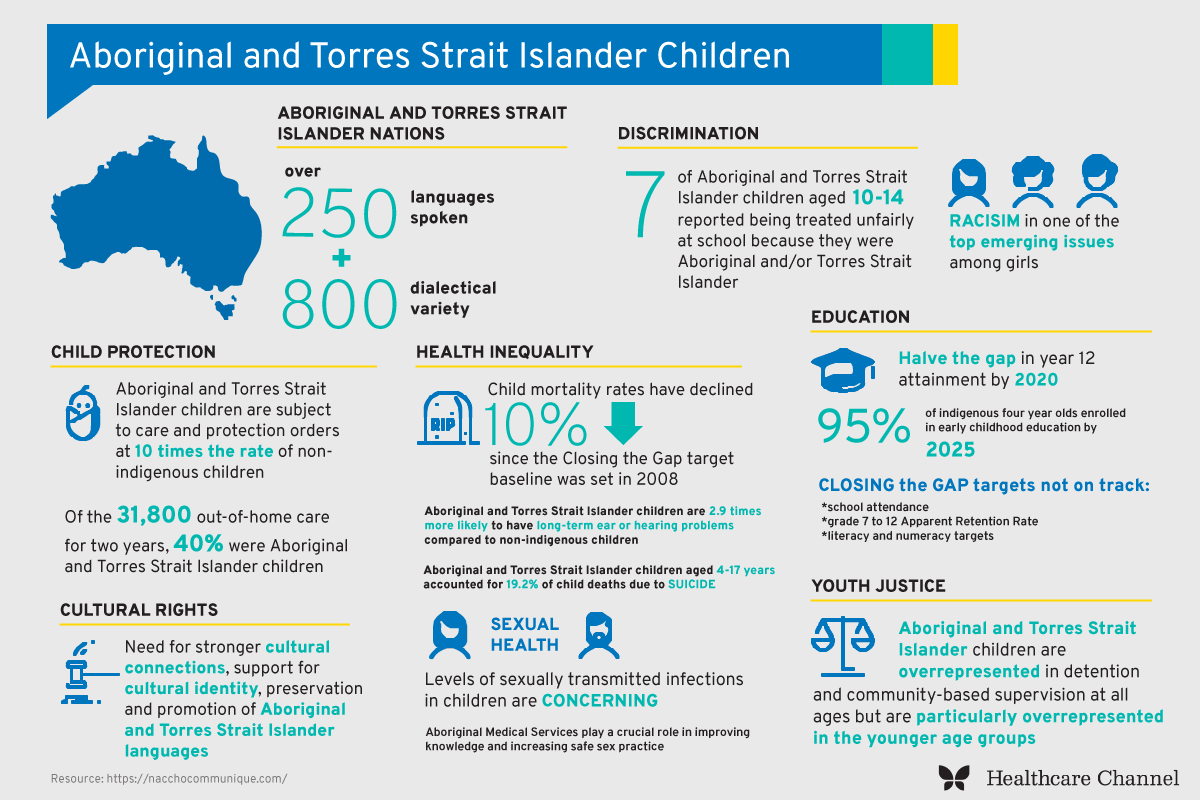 Aboriginal and Torres Strait Islander children continue to face significant disadvantage across a range of domains relevant to their rights and well being, including in health and education, discrimination, exposure to family violence, and over representation in child protection and youth justice systems. This overall disadvantage has roots in past government policies and practices, and the continued legacy of inter-generational trauma and disadvantage that these policies created.

Current issues in the area of health include:

“Changing this system is the responsibility of all Australians. Insisting that governments invest in prevention is about developing a national narrative of equality where everyone is given the best start in life and has the chance to succeed. To be all of who they are without fear of being dispossessed, taken away, condemned and discriminated against.

“The Australia we want is one that embraces, includes and celebrates our diversity. That is the society our children have belonged to since time began and it is the Australia they deserve and have a right to.”

Tags::
Previous Article
Diversity in Healthcare Leadership – How do we mentor the next generation?
Next Article
Strength Training in Aged Care – Keeping our seniors fit