Australian Researchers may have found CURE for the COVID-19 Virus

According to scientists in Australia, HIV and Malaria treatments can be used to fight COVID-19. A team of infectious disease experts at the University of Queensland in Brisbane say they have seen two existing medications manage to wipe out Corona virus infections.

Chloroquine, an anti-malarial drug, and HIV-suppressing combination Lopinavir/Ritonavir have both reportedly shown promising results in human tests and made the virus ‘disappear’ in infected patients. The drugs are being tested as researchers and doctors around the world scramble to try and find a vaccine, cure or treatment for the deadly virus.

Around 170,000 people across the globe have now been infected with the Coronavirus and over 6,500 have died. After China managed to get a handle on its sudden outbreak other countries were blindsided by huge epidemics – almost 25,000 people have caught it in Italy, around 14,000 in Iran, 8,000 in Spain and more than 5,000 apiece in Germany and France. Queensland researcher, Professor David Paterson, said he hopes to enrol people in larger scale pharmaceutical trials by the end of the month. 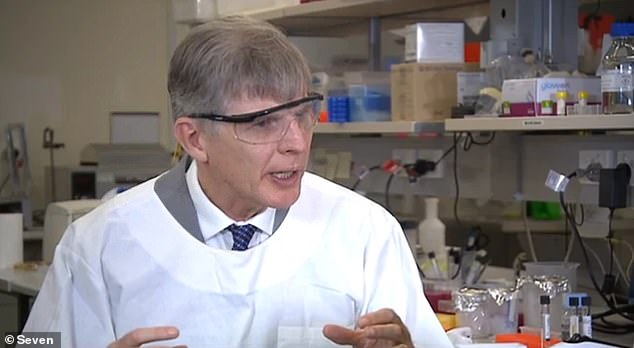 Professor Paterson said it wouldn’t be wrong to consider the drugs a possible ‘treatment or cure’ for the deadly respiratory infection.

He explained that when the HIV medication Lopinavir/Ritonavir was given to people infected with the COVID-19 in Australia it led to the ‘disappearance of the virus’.

‘Patients would end up with no viable coronavirus in their system at all after the end of the therapy.’

Although the treatment had been effective in a smattering of cases, there hasn’t been any controlled testing like what would be needed to test a new drug, Professor Paterson said.

‘That first wave of Chinese patients we had (in Australia), they all did very, very well when they were treated with the HIV drug,’ Professor Paterson said. ‘What we want to do at the moment is a large clinical trial across Australia, looking at 50 hospitals, and what we’re going to compare is one drug, versus another drug, versus the combination of the two drugs,’ Professor Paterson said.

There have been around 300 confirmed cases of the coronavirus in Australia and three people have died.

Lopinavir/ritonavir, the anti-HIV drug being tested, is most commonly sold under the name Kaletra. It is an antiviral medication which can be taken twice a day by people infected with HIV in order to reduce levels of the virus circulating in the body. Regular use of the medication is intended to stop HIV progressing to AIDS, which is fatal, and may also reduce the risk of people transmitting the infection to others. It is a type of drug called a protease inhibitor, which works by stopping viruses from using an enzyme called protease, which is vital for them to be able to spread.

Without protease viruses cannot make the fully-matured clones that they need to be able to infect other healthy cells, so the infection can’t spread.

This ability to stop a virus from reproducing and infecting new cells is believed to be what apparently makes Kaletra an effective coronavirus treatment.

Possible Cure for the Corona Virus 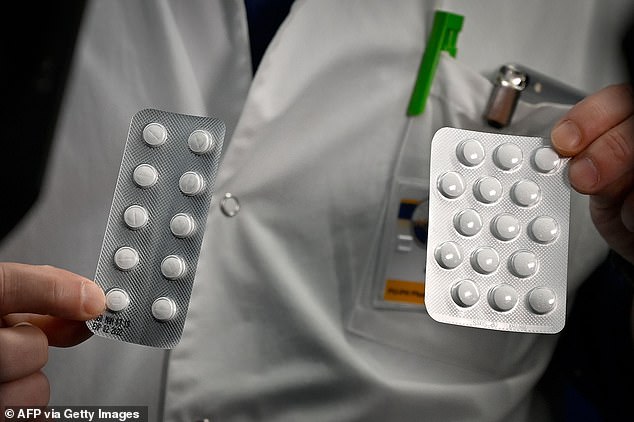 Kaletra is approved for use in the US, Europe and Australia, and its manufacturer – AbbVie – has already donated supplies of the drug to authorities China, the US and to the World Health Organization. It is a different combination to the PREP drug which was recently approved for HIV prevention in the UK.

Chloroquine – an antimalarial drug – works in a different way and is given to people to prevent malaria infections if they are bitten by a mosquito carrying the parasite.

It does not cure malaria but stops it from developing when taken before, during and after someone visits an at-risk area. The drug works by salts inside them poisoning parasites and preventing them from  growing inside human red blood cells.It has also been found to be able to destroy viruses, and scientists found in lab tests that it could be effective against the coronavirus (SARS-CoV-2).

Chloroquine is already widely used as an antimalarial for travellers and is also approved in the UK for use on people with rheumatoid arthritis or lupus.

Scientists are keen to use an already-approved medication to try and treat the coronavirus because it would cut out the lengthy processes of safety trials – they are already proven to be safe – and getting government approval and manufacturing.Professor Paterson, an infectious diseases physician, has launched a fundraising appeal alongside the Royal Brisbane and Women’s Hospital to raise money to support the clinical trials.

The Coronavirus Action Fund hopes to raise $750,000 to go toward understanding and better treating COVID-19.

A statement from the organisers says research and trials will be underway as soon as funding is secured. 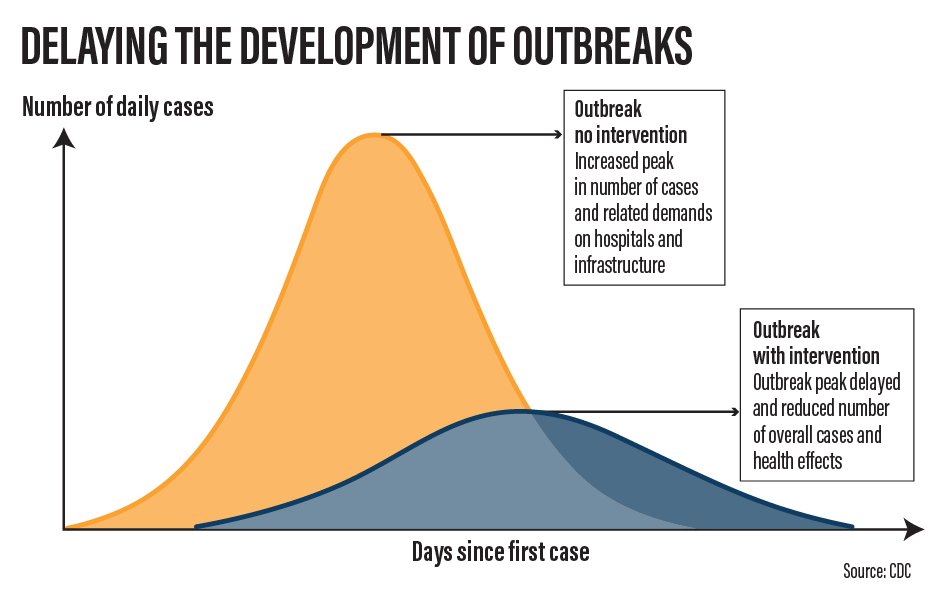 flattening the curve during outbreaks

35 Experimental Vaccines are in Development

It comes as a senior US official revealed that humans will begin trials of an experimental coronavirus vaccine today. Forty-five participants in Seattle – which is currently being ravaged by an outbreak – will receive the jab to test it is safe. None of the volunteers, who are aged between 18 and 55, will be infected at this point. Further trials are planned if the vaccine is safe.

Dozens of pharmaceutical firms and universities across the world are in a race against time to create a COVID-19 vaccine. Leading officials have already warned a jab to protect millions could be a year away, meaning thousands will die in the meantime. The World Health Organization says 35 experimental vaccines are in development, including one co-developed by the US government.

The National Institutes of Health is funding the trial of the jab, which was created alongside Massachusetts-based Moderna. The first participant in the phase one trial – the earliest stage of human drug research – will receive the vaccine today, an official revealed. None of the patients will be infected with the Coronavirus at this stage.  All of the patients will receive the experimental jab at the Kaiser Permanente Washington Health Research Institute in Seattle.

The source who disclosed plans for the first participant spoke on condition of anonymity because the move has not been publicly announced. Public health officials say it will still take a year to 18 months to fully validate any potential vaccine – despite human trials beginning. In response to the national crisis, Australian Prime Minister Scott Morrison on Monday implemented a self-isolation period for anybody returning from international destinations.

All passengers who arrived after midnight were instructed to head straight home to self-quarantine for 14 days to ensure they’re well and not carrying the disease, which has now spread to 157 countries. Individuals who fail to comply could face up to six months in prison, a fine of up to $11,000, or both, he said on Monday. Additional penalties could be imposed for each day the offending continues.

Victoria implemented a state of emergency from midday on Monday for at least four weeks, granting authorities the power to restrict movement and prevent entry to premises to protect the public. Victoria’s state of emergency will aim to enforce the national 14-day isolation sanction declared for all travellers coming into Australia.

‘Those orders in the first instance relate to that mandatory – not optional in any way – mandatory home quarantine or at a hotel if you are not a resident,’ Mr Andrews said. Meanwhile the government has been busy preparing a second stimulus package, to encourage increased spending amid fears COVID-19 could plunge Australia into a recession. 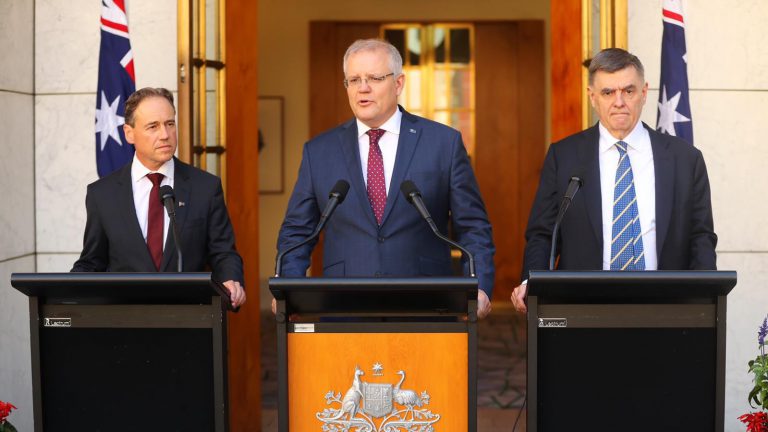 With more than 300 people in Australia now infected with COVID-19, the PM’s office is considering a second stimulus this time focused on helping struggling industries like tourism, aviation and hospitality, sources close to Mr Morrison confirmed.

Retailers across Australia are predicted to be hit hard by the self-isolation procedures. Supermarket giants Coles and Woolworths will introduce drastic new measures from Tuesday to ease the burden caused by customers panic-buying essentials in response to the crisis. Shelves have been stripped bare across the nation for weeks, with toilet paper, pasta and hand sanitiser in the greatest demand.

Woolworths and Coles will be closing their doors at 8pm each night to give staff a chance to restock and sanitise. Doors will open again at 7am for elderly customers and people with diabilities, before opening for the general public again at 8am. ‘We want to slow the panic down,’ Woolworths managing director Claire Peters said.

‘We understand that our customers’ priority is to be prepared, but the vast majority of our food is grown or manufactured in Australia so there is not a concern with supply. What we have is a spike in demand.’

Tags::
Previous Article
COVID-19 Vaccine Developed and Clinical Trials Have Begun
Next Article
SOCIAL DISTANCING and COVID-19 – How it can help save everyone from the outbreak

Dementia in seniors in Australia report as of September 2021
Nina Alvarez Sep 21, 2021

The world is failing to address the dementia challenge
Lourdes Antenor Sep 3, 2021

Dementia in seniors in Australia report as of September 2021

Petition for NDIS change due to age discrimination towards disabled seniors

The world is failing to address the dementia challenge

SOCIAL DISTANCING and COVID-19 – How it can help save everyone from the outbreak
Jason Warner Mar 17, 2020