When my mom was a teenager, she over-plucked her eyebrows and they never really grew back. For as long as I can remember, she would draw them on with an eyebrow pencil and they always looked flawless. As her Alzheimer’s progressed, she began to have trouble drawing on her eyebrows. Something she had done every day without thinking about it too much was now a difficult and unfamiliar task. She began obsessing over it.

We tried hiding her eyebrow pencil from her, hoping she would stop stressing about it, but she asked for a new one as soon as she couldn’t find it. One day I went over to my parents’ house to pick my mom up to go out somewhere.

When I arrived, I found her upstairs in her bathroom, checking her appearance in the mirror.

She turned toward me and asked, “Do my eyebrows look okay?”

I tried to keep a neutral expression on my face as I examined hers.

She had drawn her eyebrows on so dark and so thick that I knew I could not let her go out looking like that. But I also knew it would absolutely crush her if I told her how ridiculous her eyebrows looked.

It broke my heart. 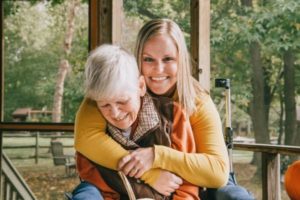 The author, Lauren Dykovitz, and her mom.

I didn’t want to break hers, too, by telling her the truth. But I also didn’t want to embarrass her by allowing her to go out looking like that, even if she would have never known the difference.

So I held back my feelings and simply said, “They’re a little dark. Here, let me fix them for you.”

I wet a washcloth, put some soap on it, and began to wipe her eyebrows off a little until they looked better. She thanked me for helping her and we headed out for the day.

When my mom was diagnosed with Alzheimer’s, no one told me that something as simple as an eyebrow pencil would now have the ability to break my heart.

But if you have kindness, empathy, compassion, patience, and love, then you are on the right track.

One day at a time.

One dilemma at a time.

One eyebrow pencil at a time.

Alzheimer’s will break your heart in ways you never thought possible.

Try not to let it break your loved ones, too.

Stalling the build-up of Alzheimer’s peptide

A simple blood test for early detection of Alzheimer’s disease